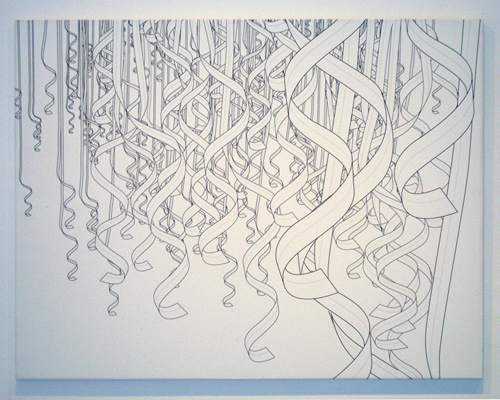 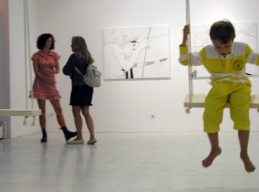 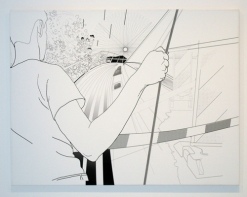 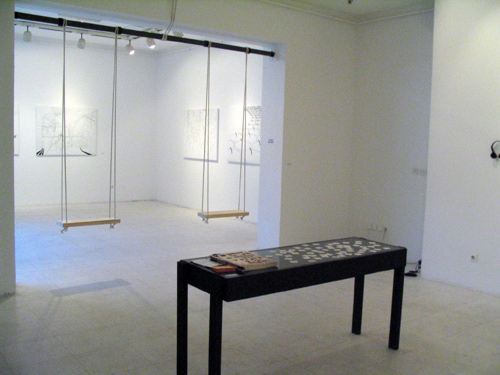 Solo exhibition in Gallery Nova, September, 2004 featuring a then, new body of work including a series of computer drawings, audio pieces (“Hypnoaudio”, “The Abandoned Glove”, “R u a Loser?“), series of stickers, four of the “Locations” videos  – all grouped around the central “Swings” installation. With this exhibition my work had taken a big turn towards exporing computer drawing and narrative audio.

Diary of descent or A Fantasy of a Lifestyle – excerpt from the Diary of Lala Rascic 04.06.2004
It goes like this: my last link to the world fell together with me into the sea last night while I was helping Miha to park the boat into the marina in Rovinj. I hope that the mobile phone will work again today when it dries completely, but it looks like the chances of reanimating that gadget are slim.
The exhibition opens in exactly three months. I am thinking about the new work and it all reminds me of the state of the lost mobile phone. Let’s try to draw a parallel.This is not the first time I find myself in this situation of the severed communication channel. Not so long ago I lost my phone for the first time. This situation can maybe explain the state that I try to describe in my new works. This state is probably connected to my recent intentional, although completely unfunded decision to stop working with video.
The sudden loss of the mobile phone, as the loss of the fundamental work and communication tool, significantly changes the foundation upon which a “personal reality” is organized. The nature of social interaction changes. Suddenly all actions proceed in some other order, some chores pile up while others disappear. The loss of a mobile phone is a fully acceptable alibi for slacking and evading unwanted contacts. The loss of a phone is a specific state, a state of emergency that reclaims silence and restores a kind of “natural” rhythm. It’s needed to restructure the organizing of a workday; it is also needed to adopt changes in re-thinking free time.
All of a sudden you are again and for real, one entity, closed, autonomous. Communication becomes selective and unmediated, the alarm doesn’t go off, the notices for parties and reminders of birthdays are gone. Especially in my Amsterdam flat without a land phone line I become a world on its own.
In that state I have discovered the long awaited gap, the possibility of stepping out into the world “beyond the looking glass”. Even though the world around me remains unchanged, the loss of the phone changes the micro reality of daily routine, opening some new space of freedom. In that state I have realized that it is possible, after all to fabricate for oneself that alternative, desired, reality that remains in sync with the surrounding (which remains unaltered).
Information can be avoided; reality can be filtered just like junk mail. To hide for a while, to move without being monitored by the caring eye of our loved ones, disconnected, without responsibility, without the pressure of ambition, without the conditioning to action.
The mobile unit is temporarily unreachable.
The loss, which grants freedom.
What seems to string thru all my new work is the attempt to transcend that casual moment of escaping reality, the attempt to fabricate a space in between, detached form the world but at the same time in harmony with it.
…In the drawings I try to represent the worlds that open just beyond the tips of my outstretched legs. Capsules of separate space I find in constructed, isolated spaces. I find them mostly when traveling, in between locations that I am connected to, to where I belong. Trains, the interiors of art installations, the decks of boats.
Reality, it seems, fell apart and came back together again, maybe that is the reason I use such a precise technique, like an illustrated manual for an alternative.
The motive of the swing I use as a metaphor for play, the childish escape into an imaginary world. I have also discovered that the swing is a natural anti-depressive. The swing as a device of getting off the ground, simulation of flight, levitation, renouncing the responsibility of participation… To find yourself in zero gravity where value systems are subjective and fall under some personal categorization. All in the aim of finding territory of retreat, the creation of the sovereign, autonomous province of “me”.
Maybe it would be easier if I was invisible?
I have dedicated myself to the exploration of how far is it possible to distance myself from the moral obligation to participate. Is it possible to discover ones own identity in a context without context, thru the banal position of losing a mobile phone.
Even though I do not believe in the world in which I live in, and maybe that is why I do not want to participate in it, by choosing to be an artist I realize the obligation and the importance of having an opinion. Paradoxically, I see my escapism as a sort of activism. I consider that the renouncing any position of autonomy (a decision for which I am completely morally responsible), except the one that I am offering, maybe has the potential of a political statement.
Text for Gallery Nova newsletter August-September 2004, on the ocassion of solo exhibition “Lala Rascic – New Work”, 09.09.2004 –
12.10.2004, Zagreb, Croatia